Can’t find what your looking for ?

Well Maple class, what a strange end to our year together... As we can't be together at the end of term, I thought I would write all of you a message here instead.

Even though this year has been a bit odd, I have thoroughly enjoyed teaching all of you this year. You are an amazing bunch of young people and constantly amaze me with your talents and never ending kindness. I have spent so much time this year telling anyone who will listen about how kind all of you are and how you all look out for each other. I am so proud to have been able to teach you this year and to get to know you all. We have had lots of fun together and much laughter too.

I am sure that you will continue to be amazing in Year 5. Keep on being kind, curious and considerate. I can't wait to hear what you have been up to!

Have a wonderful summer - every single one of you has earnt it!

One of you have defeated Catwoman!

You have shown determination and perseverance.

I hope that all of you have managed to enjoy the sunshine over the past few days.

There are some fun activities to do in your work pack and I can't wait to see what all of you come up with. I will upload examples of your amazing work onto our class page so we can all enjoy it!

Remember to read a good book, practise your times tables using 10 ticks and go through the spellings that you have learnt so far this year.

Underneath I have uploaded some documents that might be useful along with the Time Tables Superheroes sheets.

Keep being amazing. Keep working hard. Most importantly, have some fun too!

I'm looking forward to seeing you all soon!

We spent some of the first day back exploring how buildings in Japan are built so that they sway during earthquakes. We talkaed about why that might be and then the children were set the challenge of making structures of spaghetti and marshmallows.

At the end of the lesson, I shook the tables to see how well the structures would withstand an 'earthquake'. I have to say, they did very well and several were left standing! Well done Maple class! 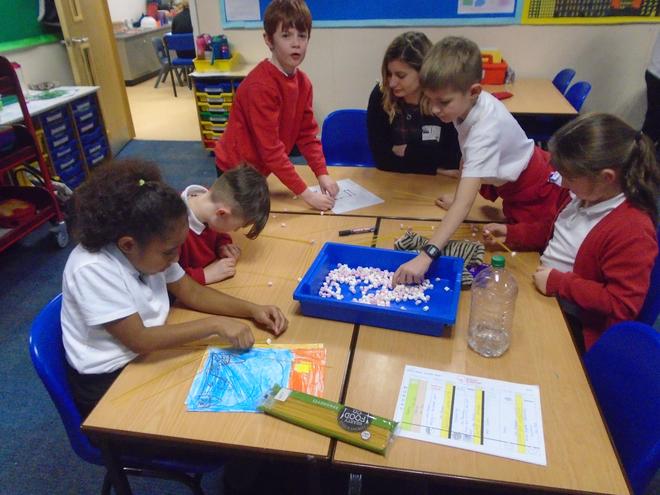 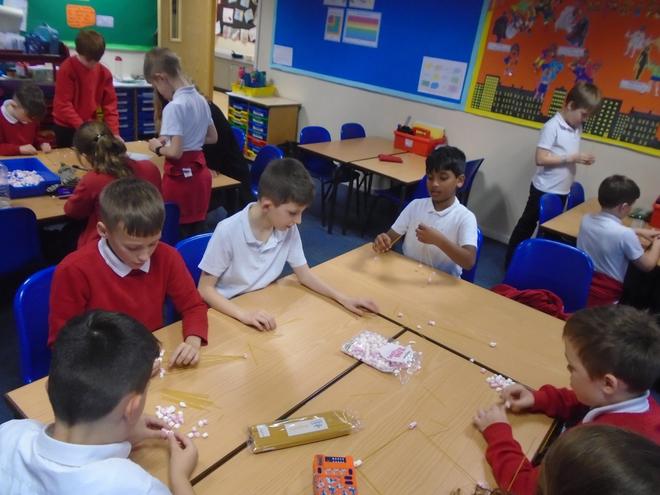 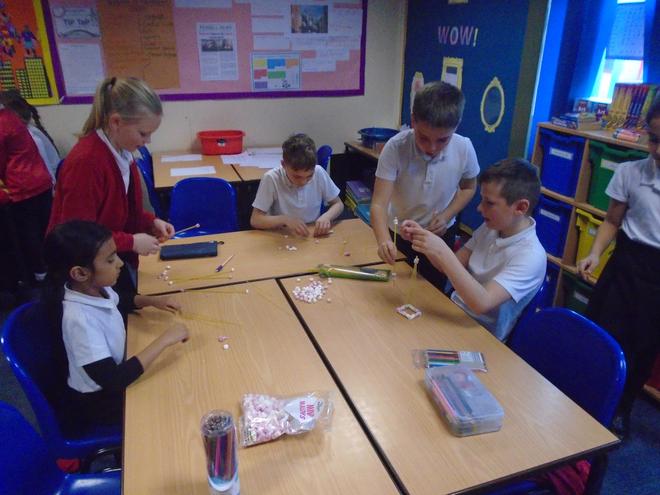 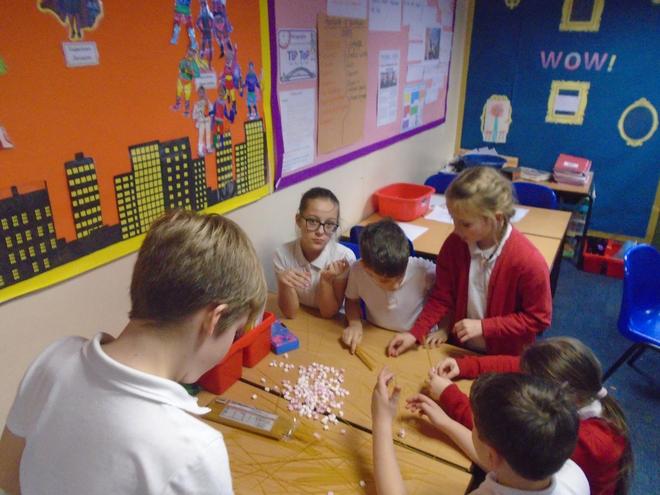 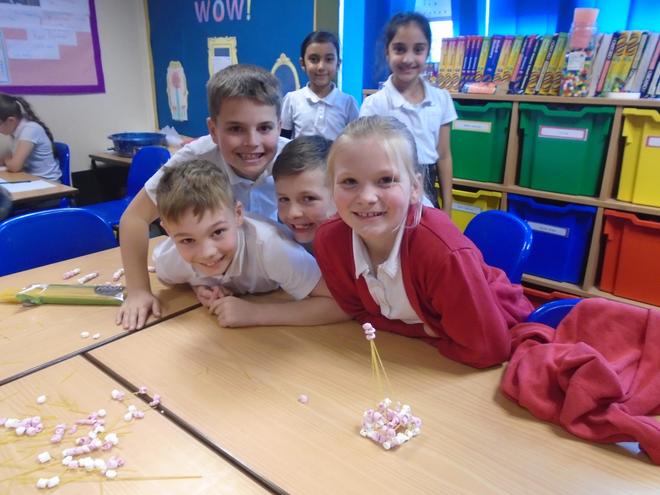 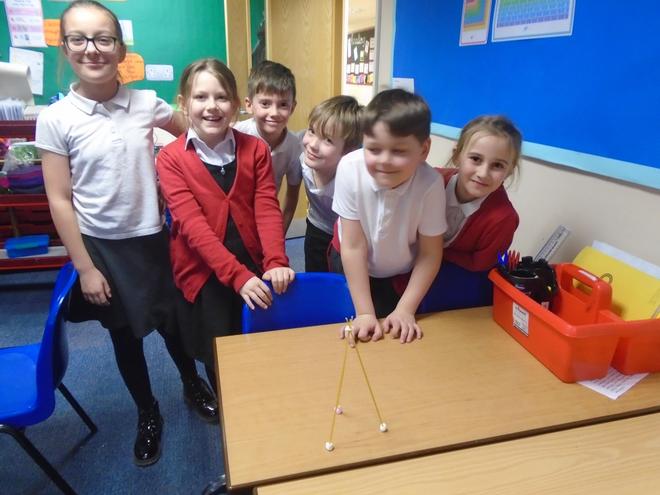 We spent the last few weeks before half term designing and making robot heads ready for our cicuits to be secured inside. We chose to make robot heads to link to our focus book: The Iron Man. We used our science topic 'What Goes Bang?' knowledge to help us build a simple working circuit.

Have a look at our finished robots - they're fantastic!

Our topic is called 'What Goes Bang?' and is all about electricity. So far we have identified electrical hazards in and outside the home and shared what we already know.

Today we looked at what makes circuits complete and incomplete and how to build a simple circuit. The children enjoyed choosing their components and problem solving if their bulb didn't light. They showed excellent perseverance and determination!

In P.E this term, our focus is gymnastics. Over the last two weeks we have been exploring different ways of travelling and balancing from mats to low apparatus.

This week, the children were given the task of working as a group to create balances. Have a look at how they did.

To add the finishing touches to our Viking houses, we went spent the afternoon searching for sticks, moss, leaves, pebbles and any other interesting finds. The children loved being outside and had a keen eye for objects that would suit their houses.

The children worked really well in their teams and managed to design and build some fantastic Viking houses.

Have a look through the pictures to see our search and our finished houses.

Last week the children investigated different Viking houses and worked as a team to design their own Viking house.

Today (much to their delight!), they have started to make their houses using their designs as a guide. They have made a good start and are eager to continue tomorrow.

Thank you to everyone that has donated cardboard, the children loved having such a wide selection of shapes and sizes to choose from.

Keep an eye out for our finished houses!

Over the last few lessons, we have been learning how to divide using chunking.

Today, they chose a division number sentence, decided as a group how long they thought it would take to solve the problem and then used chunking to find the answer. They really enjoyed the element of competing against each other!

When they had all finished, they discussed what they had done and made corrections where needed. Well done everyone! 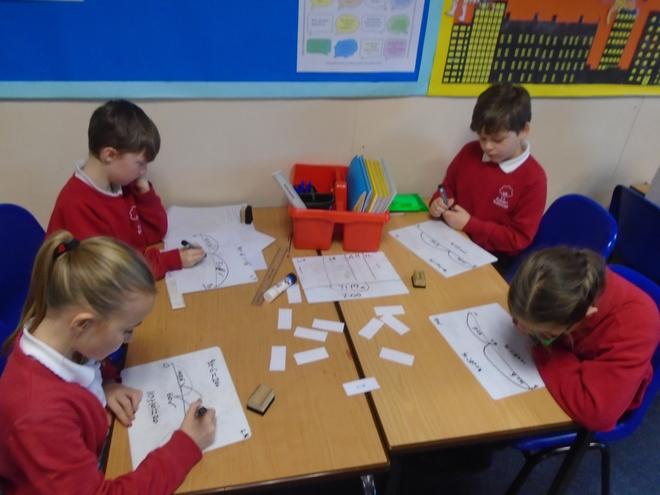 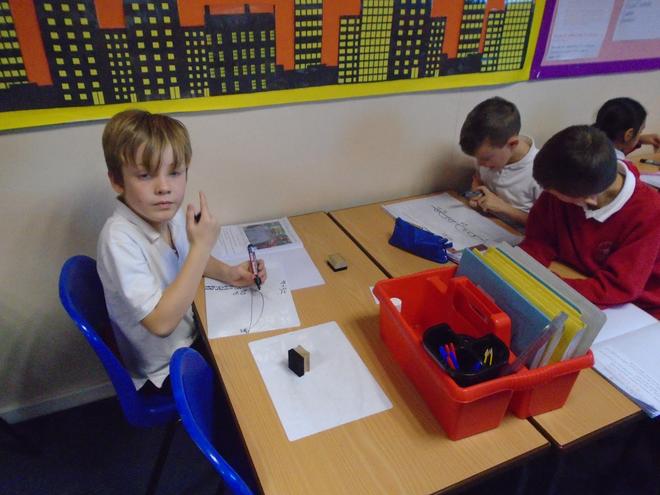 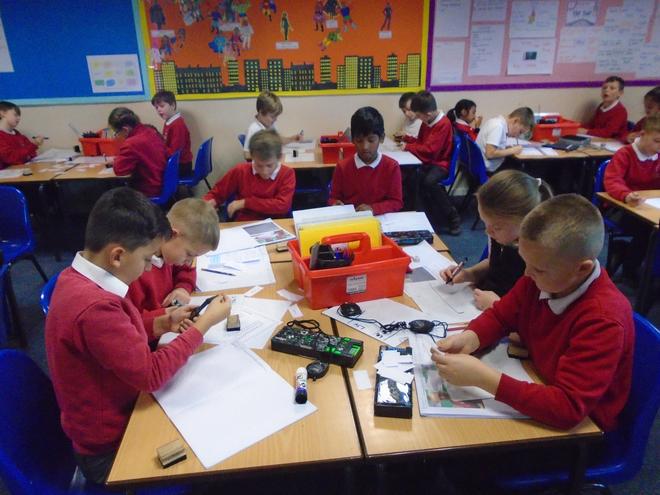 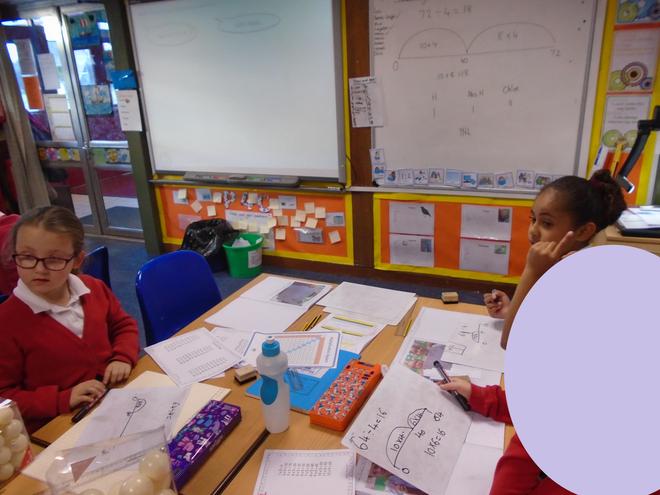 Should the Vikings be allowed to stay?

We split the class in half for topic to have a debate. One half were the Anglo-Saxons and the other were the Vikings.

The children were eloquent and listened very well to each other. We were very impressed that the Anglo-Saxons gave the Vikings terms and conditions to them staying in Britain!

To kick-start our Viking topic, we began the term with a 'wow day'.

We began the day learning about Viking helmets, the different types and how they were made. We then made our own! It was a fiddly job and tricky at times but the children worked very well together and made some excellent helmets!

We spent the afternoon designing and making Viking shields. We looked closely at patterns and the types of designs that were used before creating our own. The children did an excellent job and looked extremely fierce when wearing their helmets too.

While they were busy being creative in the classroom, Mrs Rutherford was very busy baking Viking Bread with small groups of children. It smelt delicious, we hope it tasted yummy too!

Gregorick, the Anglo-Saxon, paid us a visit and had lots of interesting and exciting artefacts to show us.

First, he welcomed us into the small hall by blowing a huge horn which made us all jump! The children were mesmerized and he even let one of the children have a go - it was harder than it looks!

Then, he talked to us about the battles that he and his tribe faced and why they often had to defend themselves. He showed us the weapons they would have used (all blunt!) and explained all of their different uses. One weapon was a small sling shot, axes, spears and swords. Some of the children even got to have a go at charging at him with a spear to hit his shield! Luckily it was a strong shield!

Gregorick showed us the different types of helmets that he and his people would wear and explained why they all looked so different. Ask the children to see if they can remember.

We then split off into our own classes, we stayed in the hall and learnt all about crime and punishment. We learnt that if you were punished for a crime, the Anglo-Saxons has very starnge ways of deciding if you were guilty or not. We held a mock trial and the children had to judge if the thief was found guilty or not. They were very harsh judges and decided very quickly that they had indeed committed the crime!

Gregorick then showed us how to play a popular Anglo-Saxon game. It was a little bit like connect 4 and the children soon got the hang of it.

Finally, in the afternoon, we made brooches and had a go at writing with a real quill and ink. It's harder that it looks but some of the children showed a real talent for it!

Maple class have been transformed into Anglo-Saxon designers! They spent a lesson exploring Anglo-Saxon brooches focusing on the patterns, symbols and shapes and used then what they discovered as a stimulus for their own brooch designs.

Much to their delight, they were able to use clay to begin making their brooches. The children used a range of tools to create different patterns and textures. Some used their hands to sculpt the clay into different shapes and others used water and fingers to create a smooth effect. The children loved it! I am very proud of the effort and creativity they displayed throughout the lesson and they are very excited to finish their brooches as soon as they are dry.

Watch this space for the finished products...

Yesterday, Maple class spent the afternoon outside investigating the different habitats in our school grounds. We spent a lot of time exploring the ditches, hedgerows and the forest trail around the edge of the school (much to the children's delight!) and discovered lots of mini beasts lurking in lots of different places. We talked about the different sorts of habitats and why some creatures liked dark and damp homes, while others liked to live in bright, leafy homes.

We even identified the different sorts of trees in our school grounds and looked at the differences between each tree. They were particularly excited to find a maple tree!